Did you doubt the power of the internet to bring people together?  SlowBoat posted about the Belhaven Memorial Bathroom . . .  and now BestRestroomAward is following me on Twitter. (What's YOUR favorite restroom? Vote early. Vote often.) 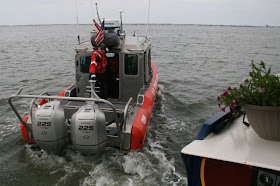 Earlier this week Dismal Swamp Locktender Robert Peet, on hearing we'd set aside a year for this trip, said (without a trace of irony): "You're going too fast." But SlowBoat keeps a' movin. We left Portsmouth, VA, Monday under swirling little flakes of snow.

We cruised down the Elizabeth River, past container ships large as luxury hotels and Navy ships defended by floating police, and then--all of a sudden--we were starring in a Hollywood action movie! (Does the Cap remind you more of Matt Damon as Jason Bourne or Daniel Craig as James Bond?)  A fleet of SEVEN--count' em--seven super-Zodiacs, spread out in a line, were bearing down on us.  Each one powered by snarlin' twin Mercs. Each one loaded with a full crew of armed men. Each with a machine gun on the bow.

One of them broke the line and pulled close.  The radio crackled to life. "DRAGONFLY! Permission to board on your port quarter!"

Three young muscular guys in dark shades clambered on. They wore big, thick, black boots and hi-tech PFDs and their belts were loaded down with a variety of Star Trek-quality oddments (I'm sure I saw a phaser.)

But not to worry. It was the Coast Guard.  It was a routine safety check.  We have three fire extinguishers, our toilets do NOT vent to the outside water, our horn works, we carry safety flares, AND Cap managed to find our boat registration, which the crew had carefully stored in a very safe place.  So we were good!

After admiring our pine paneling and our armory of solar panels and our dry bilges, the young Coast Guard captain gave SlowBoat's Cap the ultimate sailor's compliment.

"That engine room is immaculate, sir."

Cap was floating on air the rest of the day.

The 120-foot long floating classroom, which is completely off the grid, aims to teach school kids and the public about sustainable energy and also cleaning up the Elizabeth River, one of the Cheseapeake Bay's most polluted environments. Great work! (And could we fit a wetland on SlowBoat?)
Cynthia at 3/29/2011 07:54:00 AM
Share